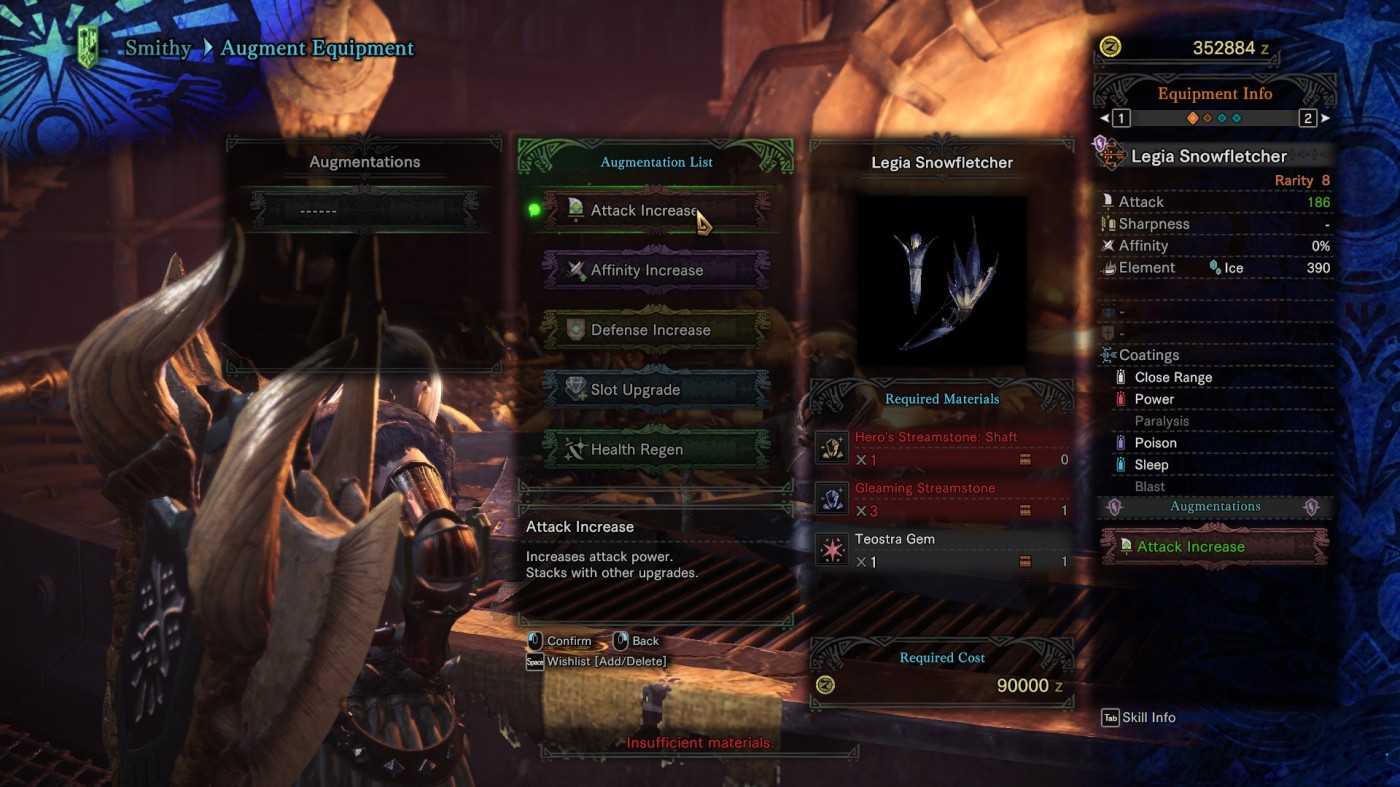 So far in this series, I looked at Monster Hunter World (MHW) from an economic perspective to see how real-world economics manifests itself in video games. In Part 1 and Part 2 of the series, I detailed background of the game and the relatively normal pre-endgame, respectively. Today, in Part 3, I will be diving deeper into what exactly makes the endgame “broken”, and in Part 4, I will detail what some of the consequences of the broken endgame are.

Similar to the pre-endgame, the endgame consists of hunting monsters in order to upgrade the players’ equipment. This is mainly achieved through investigation rewards, which are what a player receives after completing a hunting quest and these rewards have various percentage chances to drop rare items with the rarest items obviously having the lowest drop chances. However, in contrast to the pre-endgame where even the rarest drops could be achieved with a maximum of a couple languid hours of game time, the endgame of MHW is a veritable time sink as drop rates for needed items are drastically reduced.

Much of the MHW endgame revolves around augmentations, which are enhancements to player gear and unlock new properties for the weapon or armor. Augmentations are essentially the sole path for improving a player’s build at this stage as by the endgame, most players already have the highest level of weapons and armor and so augmentations function as a way for a player to min max their character to its fullest potential. And while augmentations (which require certain materials to craft) for lower level gear are moderately easy to build, many players understandably focus on using augmentations to upgrade their highest-tiered equipment. And this exact point is where the economic shortage comes into play.

In order to augment the highest-tiered weapons (Rarity 8), there are three required materials. A monster gem (which as we previously discussed in Part 2 are rare, but not too difficult to acquire), gleaming streamstones (pretty easy to get once you are a high enough level), and the Hero’s Streamstone, aka the problematic epicenter of MHW’s endgame. Hero Streamstones are the gatekeepers of the endgame as without them, players are stuck at a point where they have top level gear but are unable to augment them in any way. They are essentially a mandatory item as there is no alternative way of augmenting a Tier 8 weapon. Hero Streamstones can only be found one way, as investigation rewards from completing hunting quests. Unlike the rarer investigation rewards of the pre-endgame, which have double digit drop rates, Hero Streamstones had an initial 3% drop chance in the game. And the only investigations on which they dropped were Tempered Elder Dragon investigations (basically hardest and most time-consuming monsters to defeat). In addition to the paltry drop rate and lengthy fight to acquire them, Hero Streamstones also drop in 14 different varieties, one for each of the weapons in the game. This means that after finishing one of the most challenging quests a player had about a ~0.2% chance of finding the Hero Streamstone for the weapon of their choice. And even in a game where players often wield more than one weapon, the percentages are still incredibly low.

So in order to get their desired Hero Streamstone, a player will have to complete roughly 500 Tempered Elder Dragon quests, which for the experienced player would take approximately 12 minutes per quest or about 100 hours in total. 100 hours! To get just one item that mildly improves your equipment. Versus the 1-2 hours it took to get the rarest pre-endgame items. The developers actually even realized how absurdly low this was and raised the drop percentages by a couple points, but even with this patch, the grind is still going to take a player close to 100 hours. Of course, the obvious counterpoint is that it is an endgame item and for a game centered around a grind, it should be difficult to get one of the most important endgame items. And that there are many players out there who have played for thousands of hours and have myriad Hero Streamstones and have enjoyed the entirety of their MHW journey. And that if I don’t want to engage in the necessary grind, I don’t have to play the game. All of these are valid points. And despite this situation, I still wholeheartedly love this game and am glad of its continued critical and financial success. I just want to identify what I think is not only an inconsistency within MHW but also a prime example of a real-world economic issue.

The Hero’s Streamstone is a highly valued commodity. Every MHW endgame players wants to acquire one. Thus the demand is extremely high. And as most of us learned in basic economics, supply is supposed moves to match this demand as people are willing to pay more for high-demand items. However, in MHW, the supply is artificially restricted by the game developers through the incredibly low drop rate. This results in a shortage.

Price ceilings, like rent or fuel controls, are one of the most prominent real-world examples of an economic inefficiency that mirrors the one we see in MHW. And while obviously the stakes are much lower in MHW than in the actual world and no player is actually impacted financially by this, there is still an opportunity cost involved. MHW’s game developers are rationing out the number of Hero Streamstones, and rather than this artificial shortage leading to long lines (e.g. 1973 Oil Crisis) it results in players being forced to invest an inordinate amount of time in hunting the same monsters over and over. So the “waiting” is virtual rather than physical and while the underlying scenarios are much different, both the long lines of 1973 and continuous endgame hunting of MHW had the same opportunity cost–time. And in our next and final part of this series, I will discuss how the virtual shortage in MHW leads to the exact same results (hint, it’s black markets) as a real-world shortage.